Favourite Thing: I like it when I get to figure out things I cant see any other way – like seeing hidden universe secrets. Science means I can see things like how the inside of a star works, or use frogs and plants to tell me how healthy the underground water is.

Library assistant (actually an awesome job) all through uni. Tutor and lecturer at Monash part time. I worked at Scienceworks where I got to play with giant lightning machines and the planetarium. Then I worked at Swinburne Uni, producing and selling 3D movies about astronomy. Then I missed maths (yes, it happens) and I went to my current job.

I work at (and partly own) a company called Symbolix.

I run the company so I do lots of stuff – manage staff and work with clients (the cool bit), pay bills (the yuck bit).

Me and my work

I use statistics to describe how the environment changes over time and to test whether it’s being impacted by us humans.

Before you build something new, you can’t always tell if it might hurt the environment.  And the environment can change slowly, and it’s hard to tell whether its healthy or not (until its too late).

BUT – you can count frogs or birds or plants and use them to see how stuff changes.  Statistics is a way of describing patterns in these numbers – so we can see changes and make things better.

You can see how rainfall has changed through time

Or you can map where the local birds are: 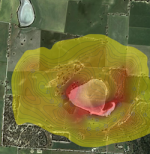 Always different! I program computers, I talk to lots of people and try to help them solve problems. My dog (she’s a kelpie) comes to the office too, so most days there is some kelpie play-time too.

What I'd do with the money

I want to show people the cool range of stuff you can do if you know some science and maths, so I’d donate the money to one of the scientist in schools programs.

But I’ll take your suggestions on what is best – what’s the best way for you to find out more about sciences and maths?

– A trip where you get to go away and spend some time doing science stuff, like this: https://www.scienceexperience.com.au/sponsors-supporters?

– Having a scientist/mathematician come to your school for a chat?

– Money to travel so you can do work experience somewhere?

How would you describe yourself in 3 words?

Who is your favourite singer or band?

At the moment – Mumford and Sons, the Lumineers, Pink…

What is the most fun thing you've done?

I once drove from Melbourne to Cairns and back again. I’ve been to lots of countries, but travelling through Australia was the best.

If you had 3 wishes for yourself what would they be? - be honest!

1. A strong cup of coffee (it’s early in the morning…) 2. Spend a white Christmas in Germany 3. Explain climate change to people once and for all so that we can all get on with fixing the problem, not arguing about it.

What did you want to be after you left school?

An archaeologist. Actually I wanted to do any science that wasn’t maths or physics. But then I stumbled onto a maths course in second year uni, and it all just clicked and I realised that I could use this to understand REAL STUFF.

Were you ever in trouble in at school?

What's the best thing you've done as a scientist?

I can’t name just one thing – I’ve loved observing on big telescopes and running planetarium shows. I once nearly started a fire with a lightning machine (which was not fun but definitely exciting). Just recently I helped to figure out which bits of road were dangerous for road kill so that they could be fixed (so less little critters get squished). That was kinda cool.

Tell us a joke.

What’s orange and sounds like a parrot? A carrot!

Sydney Roosters, Western Bulldogs. And they both did really badly last year, so I hope this year is better.